In this monthly feature, we’ll keep you up-to-date on the latest career developments for individuals in the high-performance computing community. Whether it’s a promotion, new company hire, or even an accolade, we’ve got the details. Check in each month for an updated list and you may even come across someone you know, or better yet, yourself! David Bader, director of the new Institute for Data Science at the New Jersey Institute of Technology (NJIT), has received an award from Facebook to support analytics research. Bader joined NJIT from Georgia Tech, where he was chair of the School of Computational Science and Engineering. His research aims to develop faster learning patterns to make it easier to extract actionable information from large datasets.

“Every sector from finance to health, transportation, retail to security, and fashion and entertainment, is rich in data,” Bader said. “These are often large, noisy data sets, with missing elements. We want to create tools for better understanding of these data sets.” AMD has announced that Rick Bergman has joined the company as executive vice president of Computing and Graphics. Bergman most recently served as president and CEO of Synaptics for the past eight years. Prior to Synaptics, he spent a decade in senior executive roles at AMD and ATI.

“2019 continues to be an exciting year for AMD as we deliver our new 7nm product portfolio,” said Dr. Lisa Su, AMD president and CEO. “I am excited to welcome Rick to our leadership team, at this important time, as we focus on continued growth and market share gains. We thank Sandeep for his contributions at AMD and wish him every success in his future endeavors.”

“SIGHPC believes this award fills a critical need in our community, and I am excited that Dr. Estrada has been selected to receive it in 2019,” commented John West, Director of Strategic Initiatives at the Texas Advanced Computing Center, and Chair of SIGHPC. “Dr. Estrada’s technical contributions increase the ability of researchers to effectively conduct their work using large-scale computing, and her volunteer contributions in our community provide a model of leadership that includes future generations of leaders as well.” BOXX Technologies has announced the appointment of Antonio Julio as vice president of sales. Prior to his new position at BOXX, Julio served as sales manager at Prologica Computers and as executive director of enterprise solutions and center of competence at Dell. He is now responsible for all direct and direct global sales functions at BOXX.

“I’m gratified to join BOXX as we introduce new products ranging from data science and multi-GPU RAXX rack mounted systems, to NVIDIA Studio Laptops and state-of-the-art desktop workstations,” said Julio. “We’re firmly dedicated to sales presence expansion, so I’m confident we can meet our objectives and help propel BOXX to the next level.” Cornell University’s Steven Squyres will give be a keynote speaker at SC19 in Denver, Colorado this November. His speech will be titled “Exploring the Solar System with the Power of Technology.” Squyres is well-known as the “face and voice” who chronicled Spirit and Opportunity’s extended missions, but he also helped to guide project science as the rovers examined Mars for signs of water or life.

Squyres also took part in NASA’s Voyager, Magellan, Cassini and Near Earth Asteroid Rendezvous missions. He is a former chair of both the NASA Advisory Council and the NASA Space Science Advisory Committee, and he led the most recent planetary decadal survey for the National Research Council. Michela Taufer, Jack Dongarra Professor in the Department of Electrical Engineering and Computer Science at the University of Tennessee Knoxville, has been selected to receive a 2019 IBM Faculty Award for $20,000, recognizing her leadership in HPC. Taufer will lead work with IBM to bring the IBM Deep Learning Workshop on-campus.

“Greg Peterson, Jack Dongarra, and I are working with IBM to launch a Summit-like IBM cluster to enable our efforts to move software to the next generation of supercomputers while ensuring the continued leadership of UT within High Performance Computing and computational science,” said Taufer. “The Summit-like IBM cluster is an important, missing, tile of ongoing collaboration of my lab, GCLab, and Jack’s lab, the Innovative Computing Laboratory, with UT Chattanooga’s SimCenter: Computer Science and Engineering and the Bredesen Center. As part of this collaboration, we- GCLab, ICL, SimCenter, and Bredesen- presented our work in HPC and big data at the SC conference in Dallas last fall.” 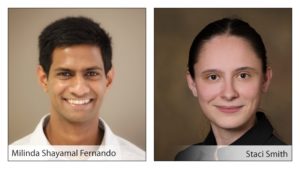 The Association for Computer Machinery (ACM) has announced that Milinda Shayamal Fernando of the University of Utah, and Staci Smith of the University of Arizona are the recipients of the 2019 ACM-IEEE CS George Michael Memorial HPC Fellowships. Fernando is recognized for his work on high performance algorithms for applications in relativity, geosciences and computational fluid dynamics (CFD). Smith is recognized for her work developing a novel dynamic re-routing algorithm on fat-tree interconnects. The Fellowships are jointly presented by ACM and the IEEE Computer Society. ACM’s Special Interest Group on High Performance Computing (SIGHPC), in collaboration with Intel, has announced the six recipients of the ACM SIGHPC/Intel Computational and Data Science Fellowships for 2019. The fellowship was established as a five-year program to increase the diversity of students pursuing graduate degrees in data science and computational science, including women as well as students from racial/ethnic backgrounds that have been historically underrepresented in the computing field. The fellowship provides $15,000 annually for study anywhere in the world.

The six winners this year include: Do you know someone that should be included in next month’s list? If so, send us an email at [email protected] We look forward to hearing from you.